Here is a walkthrough presentation with embeded video. A more detailed write up can be found below.

The following is a demo and presentation I made to explain the Evil Twin AP attack. In the Evil Twin attack, you use software to immitate a real access point in order to trick user into connecting to your AP instead of the real AP. This gives you man-in-the-middle abilities to snoop and inject data. The presentation includes videos direct from YouTube, so you can easily see the attack in action. I recommend going full screen and watching the videos in HD for best viewing.You can also view the demo videos directly at YouTube.

Note, this report is for educational purposes only. The experiment was carried out in a secured lab setting. You should NOT try this at home. If you perform the Evil Twin attack in public, you are almost certainly committing a crime (e.g. computer trespass) in your state/province/country. I will not be held responsible for your usage of information. Use your knowledge for good, not evil.

This report is also available as a PDF, which includes the full Appendix and all content, which may not be shown here. Please note, some external documents such as original packet captures will not be provided. If you just want to see the attack and not read the details, then check out the presentation version above, complete with example videos. 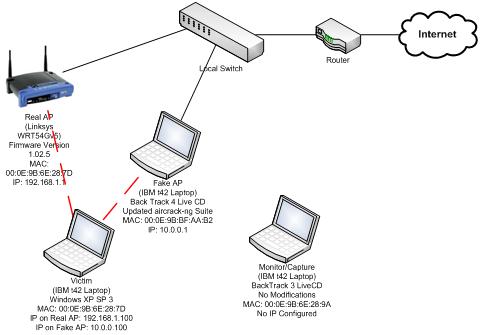 The Victim Laptop is running a standard Windows XP setup in terms of wireless. Wireless is managed by windows and not by third party program.

On the monitor/capture laptop, the Backtrack 3 Final Live CD was used. Because this machine was only being used to monitor, nothing was added or changed. In order to capture wireless traffic, airodump-ng (version: 1.0 rc1 r1083) was used. To put the system into monitor mode airmon-ng (version: 1.0 rc1) was used. Both of these applications are included by default in Backtrack 3 and were not modified in any way for this project.

In order to run the Fake AP tools from the aircrack-ng (http://aircrack-ng.org) suite were used. The specific tools used airmon-ng (version: 1.0-rc3) and airbase-ng (version: 1.0 rc2 r1385). Some built in system commands were also used such as modprobe, which is used to load kernel modules (http://linux.die.net/man/8/modprobe). In addition, in order to provide routing for the clients once they connected to the Fake AP, dhcpd (version: 3.1.1) and iptables (version: 1.4.0) were used.

Nothing special was used on the Real AP, only the Linksys web management interface.

In this scenario, we emulate an Evil Twin attack. An Evil Twin attack is where you create either a physical AP or soft AP that mimics the AP which a user will connect to. The idea is that either through user error or application design, you will trick a user into connecting to your fake AP instead of the original AP. When the user connects to your Evil Twin, you will have the ability to commit man-in-the-middle (MitM) attacks.

The attack starts with the Victim workstation connected to the real AP. Either through knowledge or reconnaissance you find out the relevant information about the real AP. Usually, the SSID is sufficient, but you may also want to imitate the user’s channel as well. After you have obtained this data on your attacker workstation, you start airbase-ng using the setting you have acquired from the Real AP. It is possible to set airbase-ng to respond to any probe request, however, we targeted our attack to a specific SSID in order not to attack any innocent workstations that were within transmission range. Once you have started airbase-ng, you must setup the client routing, which is described in detail below. The Fake AP will begin to constantly send out deauthentication packets to the victims pretending to be the Real AP. In addition, it will also begin to send out Probe Responses for the Real AP’s SSID, but with its own MAC. These packets are sent in order to force the victim to disconnect from the Real AP and then connect to the Fake AP. After a few seconds, the Victim will deautheticate from the Real AP and then authenticate with the Fake AP. If our case, the Victim receives it IP from the AP’s DHCP server. The client may try to request its current IP from the new AP. In our case, the IPs available on the Fake AP are in a different subnet. Therefore, the client temporarily loses higher level connectivity, and takes on an automatic private IP; however, eventually it will get a new DHCP address from the Fake AP. To the user on the Victim machine, it simply seems that they have lost their connection temporarily; when they can continue browsing the web after a few seconds, they do not notice anything different about their connection. As a result, the attacker is now free to commit MitM attacks on the Victim.

In our scenario, we have also set up a third workstation to capture traffic. This machine is not part of the network, and only captures traffic. The process for setting up the monitoring machine is also described below.

In order to capture the events of the attack, a third laptop was used (Monitor/Capture) and the aircrack suite was used to capture traffic. The traffic was saved as .cap files which can be opened in protocol analyzers / packet capture software such as Wireshark.

In order to setup monitoring do the following on the Monitor/Capture machine:

The following commands are run on the Fake AP laptop. There are two main stages, the first is updating software and configuring the services required for the attack, and then running the actual attack.

Setting up the Fake AP basics

With the above software updates and settings, we are now ready to setup the Fake AP. There are two separate phases, starting the Fake AP program and then setting up client handling through the iptables routing and running DHCP. You can run the Fake AP steps and then the Client steps all in one window, but it is easier to use two or more windows.

Services should be started after the Fake AP is up, the following can be run as script, all commands should be run each time. We chose to run these commands through a script, in a separate window from the commands in the previous section.

Get more details about this command at: http://linuxgazette.net/issue77/lechnyr.html

Once these commands have been setup and run, any user will be able to connect to your Fake AP as if it were a Real AP. They will have access to any services you provide, and you can perform many different attacks. This particular setup could also be used to create a non-malignant Fake AP if desired.

The Victim laptop first connected to the valid AP. After the Fake AP was started, the Victim was deauthenticated from the Real AP and then authenticated with the Fake AP. No Specific DoS attack was launched against the Real AP, the attack only relies on communication between the client and the Fake AP.

We will now show some relevant packet capture from the attack. This will help demonstrate how the attack works, the full details of the attack can be found in the Appendix I.

Video Capture We used screencasting software on all 3 laptops to show the attack. Please visit the following YouTube link if you would like to watch the video:

Remember to enable HD to better read the onscreen text.

Here is a brief summary of the packets below: First we see the DHCP Request & ACK from the real AP. We then see the Fake AP come up and begin to send deauthentication packets, though it looks like they are coming from the Real AP. The Real AP continues to send Probe Responses. The Fake AP will continue to send the falsified deauthentication packets and then begins to send its own Probe Responses to the client. Eventually the Victim and Fake AP authenticate and then associate with each other. You can then see that the Victim checks to see if it can have its current IP address, then goes to automatic private address, then eventually receives DHCP from the Fake AP. You should also note, that as long as the Fake AP is running, it will continue to send Probe Responses and the falsified Deauthentication packets in an attempt to keep the client from going back to the Real AP. Please see Appendix I for the full packet details.

[[[Please see the PDF version for this part of the report]]]

Thoughts on the exploit and defense

On its own, the Evil Twin attack is not very interesting or necessarily dangerous. However, once the attack has been committed, it opens the door for many more attacks which can cause damage or help with reconnaissance and further network penetration. The Evil Twin attack however is very important. It demonstrates the weaknesses with the design of 802.11 management that allow for an attacker to easily manipulate network management features. Looking at such attacks can help designers of future versions to develop more secure protocols and is important for current wireless network administrators to understand the threats to their network.

The Evil Twin attack is fairly easy to perpetrate. The software is freely available and a very large number of wireless chipsets are supported. As a result, any script kiddie can learn how to use the tools then deploy a Fake AP in public. Users who already trust public Wi-Fi are not likely knowledgeable to know they were ever attacked. As a result, their connections will be hijacked and any number of MitM attacks may be used.

The Evil Twin attack can be detected and its effects limited to some extent (Schiffman, 2007). Protective issues include installing a wireless intrusion prevention system (WIPS); most commodity WIPS can prevent against these attack by default. Other protective measures may include installing extra security layers such as 802.1x. In addition, network administrators should monitor traffic and perform site surveys in order to detect Evil Twins and other Rogue APs.